Recently, a lot of conspiracy theories have been floating around…

I guess the excess free time that has been forced upon us by the Corona pandemic, has added significant weight to the outbreak of these new theories, on an almost daily basis, but one of them made me move uneasily in my chair. Not so much because of the content matter itself, but more because of the pictures looking back at me from the screen. As I watched them, my skeptical smile began to change into mild discomfort – I thought I recognized those pictures… 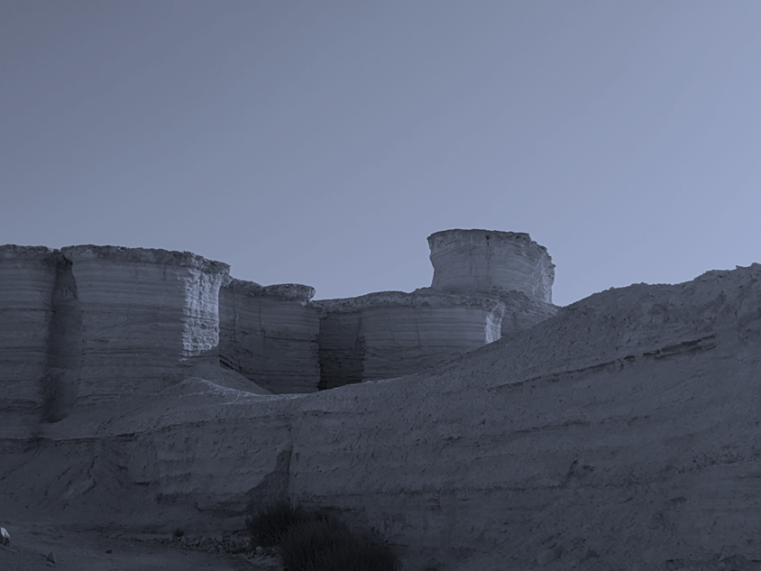 The conspiracy in question even got a Netflix Special, and it’s the theory insisting that there was never a manned landing on the moon! Apparently, it was all fake! This crazy effort was made to hide from the Russians the fact that America was technologically inferior to them. I admit that I began to read the article with a certain contempt, but as I continued reading, the feeling changed to embarrassment. Could it be that there was a grain of truth in this? Because really – those pictures, as presented, were startlingly similar to the views I’ve already seen on a Full Moon night in the Dead Sea Land…

The matter bothered me and, the other day, I got carried away and read another article on the subject, this time with mixed feelings and, when I noticed that there was actually a full moon that very night, I raised my head and asked the space around me, as naturally as you please… “Anyone want to join me tonight for a trip to the moon?”

The older kids didn’t even both responding and just shrugged a defensive shoulder, but the little one (aged only six) was immediately enthusiastic and began to jump around wildly on the living-room sofa. “Yes, yes! To the moon, to the MOON! I caught her enthusiasm; “So off we go – we’re going the moon! Get dressed in long-sleeves and pants – we’re leaving soon”. My little girl didn’t even wait till the end of my sentence, but charged off to her room to dress. As she did so, my wife glared at me, dumbfounded… “What moon? It’s late! Why are you driving the girl crazy at this hour? I wanted to get her into the shower!”

“Today we’re going to the moon!” I answered decisively, gesticulating with my index finger. Come on! I’ll pack us a small backpack, you can get dressed meanwhile, by eight thirty we’ll be out in the area, hiking in real moon craters, the ones used by NASA – or so the rumors go – to fake the landing of their spacecraft on the moon…”

We set off and, as we approached Ein Gedi from the north, my wife began to laugh. “A marlstone excursion, that’s what your moon is!”, she said. I breathed a sigh of relief to see that her mood had improved, I shared with her my insights into the counterfeit landing on the moon. I infected her with my enthusiasm to see if, indeed, the pictures were taken at the place I’d remembered.

We arrived at the parking lot with the palm trees (which is actually for buses) at Masada, and I parked my car right next to the exit point of a trip impossible to miss out on. Just before we walked along the trail with black markings, that leads to the protrusion down to the marlstone fissures, I explained to the little one that we were going to hike across the ‘moonscape’ and that we were forbidden, under any circumstances, to run. We should walk together carefully, while making sure where we step. The descent was a little steep but ended quickly and, suddenly, we found ourselves in a landscape that is completely unparalleled anywhere else. The desert winds and water have sculpted the soft marlstone into a landscape that looks as though it’s from another planet. On the right and left are steep, protruding walls of vivid white, and the path winds its way into the desert like a maze, with each turn hiding a new surprise. 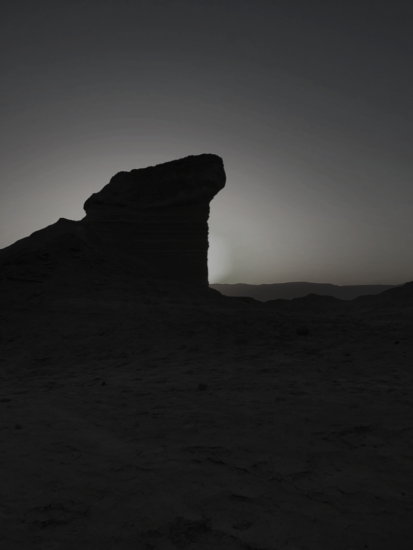 A single protruding rock could look like a giant guarding the way, or a long wall facing the road might give the impression of a hanging curtain, due to the fascinating folds etched into its walls. After a few minutes of walking we reached a fork in the paths and turned right with the green-marked route and sat down to drink some water before the short ascension. “Say Dad…”, the little one was panting suddenly due to the climb, “Where’s the spaceship?”, she wanted to know. 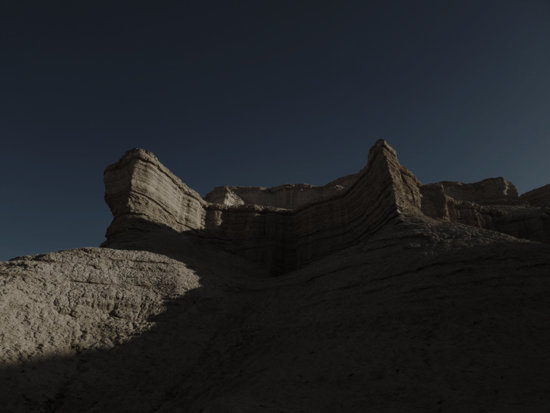 I smiled, “Why a spaceship?” I feigned innocence. “To get to the moon!”, she answered, without hesitation. “I thought we’d already reached the moon”, I said. “But how did we get to the moon when it’s hanging up there above me?”, she wanted to know, pointing her tiny finger towards the sky. Her mischief captivated me and I couldn’t continue with my pretense. This little girl’s already growing up, I thought to myself then, and explained to her that this view we’re seeing right now is just like the one on the moon. “But how do you know it’s exactly the same thing?”, she continued her questioning. I pulled my phone out of my pocket and entered one of the articles showing pictures from the moon, taken by famous astronauts, and I showed her the screen. “You see?, I said. Exactly the same” 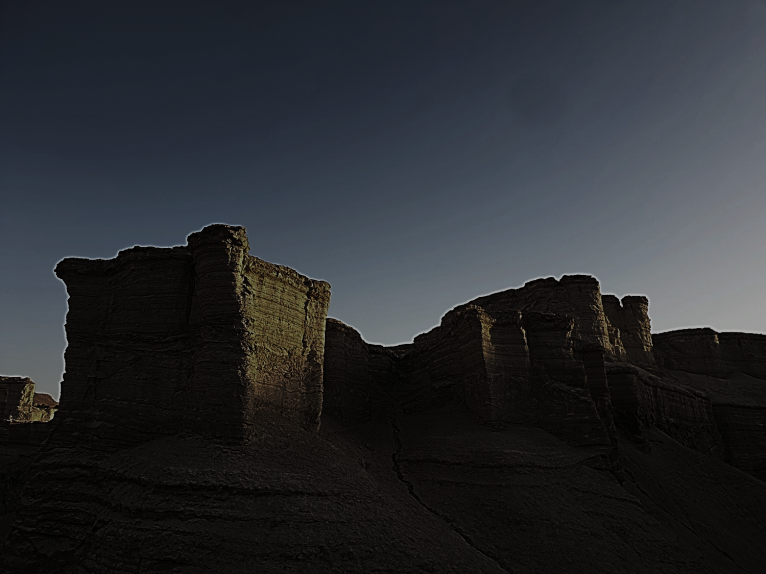 She looked at the phone and then at the landscape spread out before her. It’s similar”, she nodded with a somberness that did not match her age. “Really similar”. We rose to carry on with our trip, which continued to captivate us and surprise us again and again, after each twist and turn. The spectacle seemed, to us, to be that of an ancient fortress guarding the road and, at other times, to be huge wings, so that until we reached the mouth of the creek, in a kind of connection between the tributaries of the stream that created a vast, flat area, a sign awaited us announcing that the green path once again connects to the black path. We turned right again on the black path until we reached the ‘great mushroom’ (a mushroom-like rock formation), that seemed to us to be the climax of the trip. We could have imagined a small spacecraft landing on the mushroom-dome, with a dangling ladder and small green aliens climbing down it. My wife looked around her excitedly then looked at us both and, in all seriousness, said she thought there was no conspiracy here because, if they faked the moon landing with pictures of the views of the Dead Sea Land they’d surely be taking pictures of the landing site here, because there’s no place more worthy of winning the title of “lunar landscape” than this very spot. 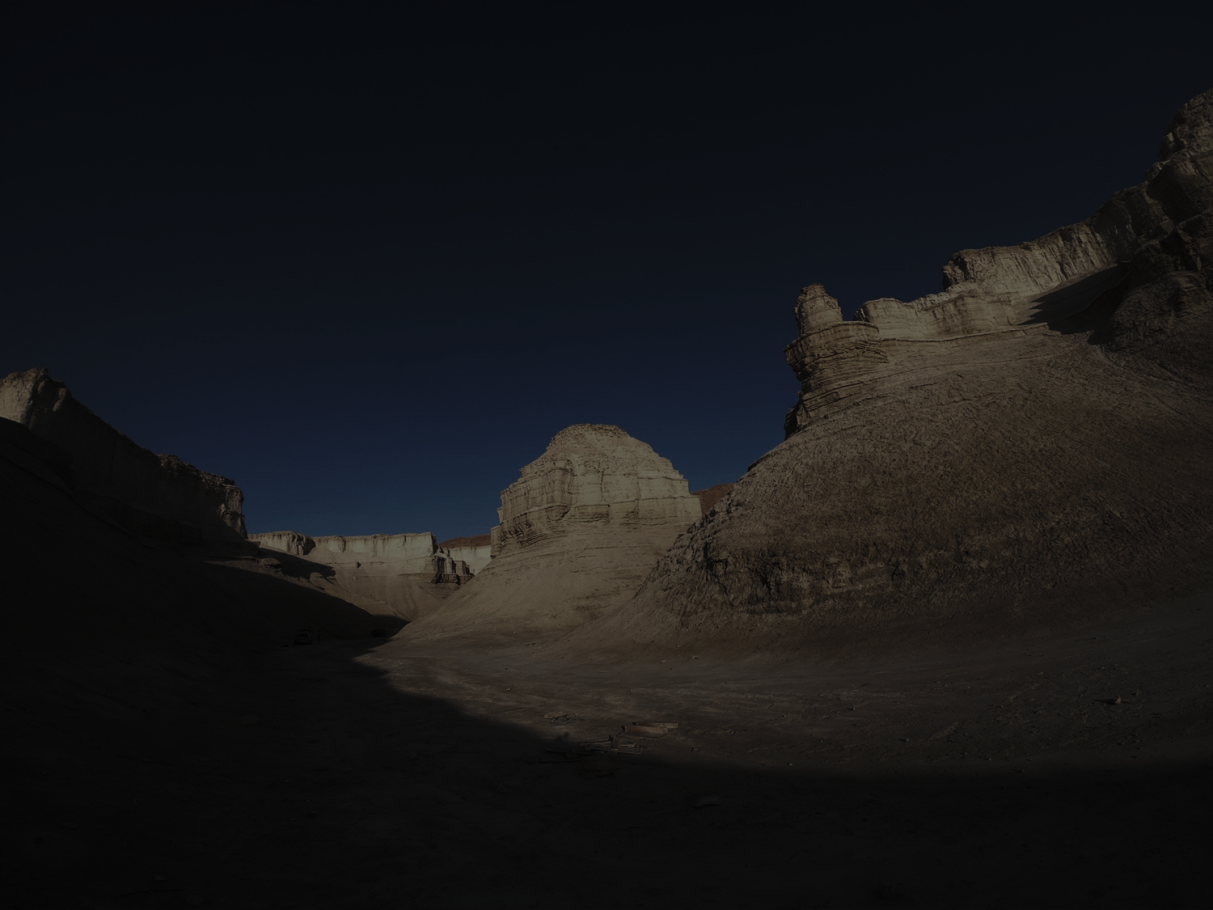 We looked around us in awe at the breathtaking beauty for a few more minutes, and began to return along the black path by the winding stream, with a moderate and almost imperceptible ascent back towards the car park, as we passed a formidable rock staircase that seemed to us to be a unique runway from which spaceships could take off. The steep ascent on the extension back to the car park felt easier to us than the descent and, rapidly, without a word of complaint from the ‘little lady’, we found ourselves back in our vehicle, replete with the powerful experience we had just concluded. We set off in silence at the start of the drive on Route 90, engulfed in the magical lights of the Dead Sea hotels reflecting on the water, and we thought to ourselves, how pleasant it could have been had we stayed in one of these hotels, so we could have been in bed within a few minutes. 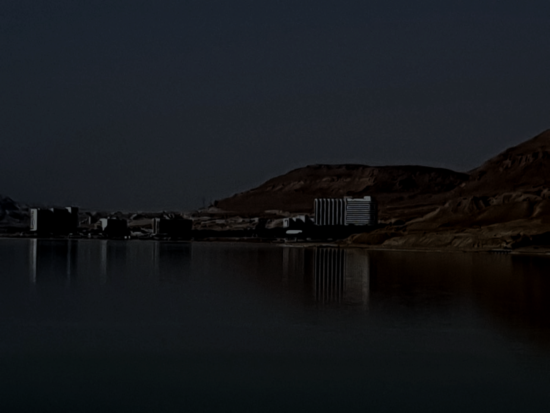 The entrance is from Route 90, turn in the direction of Masada and, just before the entrance, park in the bus-parking lot on the southwest side between the concrete KKL (Jewish National Fund) tables. There’s a black marker leading south into the stream, on a steep protrusion.

It’s especially recommended on a Full Moon night and care should be taken when walking. The experience is also good at sunrise, but the trip is less recommended during hours of intense heat.

The walk is easy, and takes about an hour, but it depends mainly on your walking pace.