Descension to a Vacation

There’s something about travelling to Ein Gedi that makes you feel as though you’re descending into the belly of the earth.
It’s not just the altitude that’s going down and down (and down…), it’s also the tranquility that suddenly prevails and your breathing that becomes deeper. This baffling landscape around you has such an intense impact and also gives you a sense that it envelops you with serenity. Time behaves differently here. The most important thing in the world an hour ago, doesn’t even touch the edges of your consciousness now.
Because that’s the way it is in the center of the earth – all the rules change.

Later, when you descend further to the lowest point on earth, and immerse yourself in the intensely briny water of the Dead Sea, think of the word Genesis and of the ancient processes that created this wonderful jewel. A huge fissure that carved out continents, tectonic plates that collided violently, causing mountains to rise up and rocks to shatter, a fissure so immense, it continues moving to this very day. And here we are, at the heart of all this drama, in the closest place to the belly of the earth, engulfed in water, minerals, mud and salt. All so tranquil and surrounded by the sounds of silence.

But we’re way ahead of ourselves, still only on our way to the Ein Gedi Hotel, which reopened on 16.6.20 in its enhanced form, despite the Corona. It’s renewed opening also caused a rebirth of itself.

The entrance to the hotel is misleading. The botanical garden is as beautiful as ever, flourishing and thriving, the sea and mountains remain exactly the same. Outwardly, everything is peaceful and relaxed, as if nothing special has happened here in the last few months. It’s only when you go inside and talk to the people, that you begin to realize the momentum of action and renewal that has taken place here in the calm heart of the desert.

The directive of the Purple Tag (permission to open for business according to coronavirus regulations) doesn’t operate here as a restriction – on the contrary. It acts as an opportunity to improve and accord a more special experience. ‘We felt as though someone had suddenly told us – forget everything you’ve done until now and rethink each detail of the guest’s experience. This innovative thinking has spawned a tremendous amount of creativity”, says Tom Geva, the hotel’s new General Manager. Tom is a member of Kibbutz Ein-Gedi and worked for many years in hi-tech, until he decided to look for something else. Something that would be challenging and creative, and that would also express his love for people. In recent years, he has voluntarily cultivated a small kibbutz pub, and his enjoyment from it ignited his desire to change direction and move into the field of hospitality.
Ein Gedi’s air seems to encourage creation and regeneration, even in those who have lived here for most of their lives.

The choice of someone who hadn’t come from the hotel industry, characterizes what’s happening at the Ein Gedi Hotel. A desire to do things a little differently, to break with old hotel traditions and bring in a ‘fresh spirit’ who will create a different vacation experience.

The cleanliness, which has always won Ein Gedi compliments, has become even more thorough. Every corner is disinfected and receives avid attention. To encourage guests to spend time in the open outdoor areas, special regard has been given to their grooming and benches were added, together with outdoor-mats and children’s games on the wide lawns. If it’s always been fun to walk around the hotel’s gardens, or to sit on the grass under the giant Baobab tree in the center of the hotel terrace, now everything has gone up a notch. Lots of lovely corners that simply beckon you to come and pass the time, to sit and relax in front of a mesmerizing view and landscaped gardens. If you have children, they will soon find themselves running around on the lawns enjoying all the games that have been put there just for them.

One of the most significant recent insights has to do with the connection with the community. “During the Corona period, we felt the power of the community and the amazing abilities of the people who live here, and we realized that we wanted to incorporate all of that into the hotel as well”, says Chen Pervolotski, the hotel’s Content Manager. “People who come here want to hear how the kibbutz was established, to become acquainted with the people who live here, to meet the local artists. Today, we provide a free cultural program for all hotel guests including excursions, performances, workshops and meetings, based almost only on local people. It’s an amazing thing, creating connections that exist nowhere else in the world.”

There has also been a small revolution on the subject of food, and meals have moved from the hotel restaurant to the café in the lobby – the “BaoBar” named after the Baobab trees surrounding it – two large old-timers and a baby Baobab, planted right in the center of the café’s terrace. Very cleverly, it was also decided to build an interior space surrounded by glass walls, that allow you to enjoy all the beauty outside, even for those who prefer their space air-conditioned.

It’s a special pleasure to start the morning in this place where, on the one hand, you can look out over the Dead Sea and the Moab Mountains and, on the other, a huge lawn adorned by enormous Baobab trees. If there weren’t so many other great things to do, one could just stay here all day long, drinking herbal tea and gazing at the scenery.

An Event in the Shade of the Banyan Trees. Photograph: Avishag Eylon 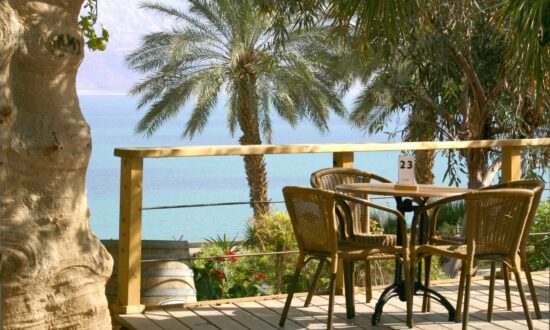 The Art of Doing Nothing

Usually, a hotel spa experience begins with an elevator that takes you into an enclosed, dark space, which someone thought needed to utilized. Ein Gedi did the exact opposite – They looked for the most desirable and special spot and there, they built the Synergy Spa.

There are places in the hotel from which you can see the sea, places where you can look out over Matzok Haetekim and the Nature Reserve, places with magnificent gardens – but only at the Synergy Spa you can find all of that, together. The spa was built on the northeast side of the ridge upon which Ein-Gedi sits, and you can see the Nature Reserve, the sea and the desert, all in one glance. Very appropriately, Amos Kenan’s charming quote has been inscribed at the entrance to the spa: “The world has seas and it has deserts, but God’s grace is where the sea meets the desert and the desert meets the sea”. 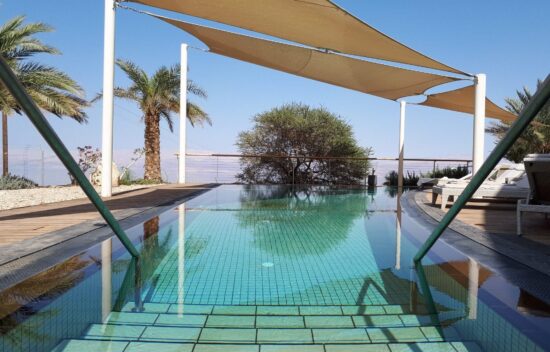 Synergy Spa is now open to all hotel guests at no extra fee (spa-only visitors are charged on regular days). The spa has a heated pool filled with water from the Dead Sea, a dry sauna, 12 treatment rooms, a freshwater pool and lots of places to relax – either inside the large, air-conditioned, glass-walled building that will allow you to see the view, or outside right in the arms of Nature.

The spa also offers a free refreshment corner with many varieties of herbal teas, cookies and fruits. There’s something lovely about this kindness, a sense that the hotel staff really want you to have fun and are making all possible efforts for that to happen. It would be great if you had 3-4 varieties of tea to choose from, but the abundance and quality are exactly those extra little steps that show you that the staff here work from the heart, and not just to clock-up work hours.

Next to the spa is the hotel’s pool, which is the bustling heart of the hotel on summer days. This pool has already starred in some lists of Israel’s most beautiful pools, and when you get there you understand why – the surprising combination of sea on one side, desert on the other and, in the middle, blue water surrounded by lawns and gardens – works wonderfully here too. 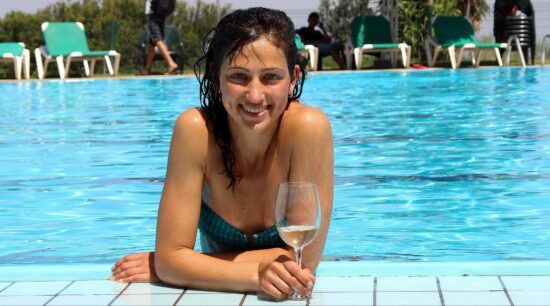 There’s no need for more than a good book, headphones and a drink in your hand, to spend a full day here having fun. Ein-Gedi even seems to persuade its guests to think a little differently about what a vacation is all about. Less pursuit of attractions and more rest. Less rushing around and more sticking around. In Ein-Gedi you don’t ask yourself what to do, you’re just there. In English it’s called: The Art of Doing Nothing. In Hebrew it doesn’t have a really successful translation, perhaps because it goes against the essence of our energetic Israeli identity.

We’ve already said that Ein-Gedi causes everyone to recreate themselves? Well, it’s happening to us, too!